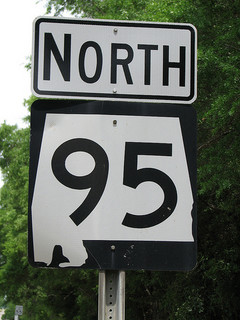 Alabama is one of the many states that follows a Tort insurance system – if you have caused an accident, you and your insurance carrier have to pay for the damage. The insurer pays up to the limits agreed in the policy, and you have to cover the rest.

Minimum Liability in Alabama follows the national trend – a ratio of 25/50/25:

Laws and regulations regarding the use of cellphones

Drivers aged between 16 and 17 may not use a cellphone at all when driving. No further bans are set, but the known recommendations hold – do not text while driving and use a hands-free device if you are going to answer or make a call.

A recent bill might prohibit operating a GPS device manually while driving, so you may have to pull over when typing in some street details.

Alabama uses a Graduated Driver License program. All teens of at least 16 years old may get a driver’s license, with no restrictions once you turn 18 or are still 17 but have had the Restricted License for more than six months. Restrictions are in line with the nation-wide GDL practices:

Penalties for driving uninsured in Alabama