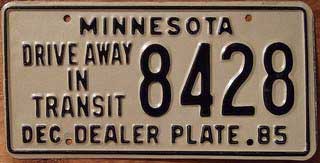 The state of Minnesota uses a No-Fault insurance model, which means that your insurance company will reimburse you for your property losses and cover your medical bills regardless of who was at fault in the accident.

The minimum insurance requirements in Minnesota are as follows:

About driving and using cellphones

All forms of text-based communication while operating a vehicle are forbidden. In addition, teenage drivers and school bus drivers aren’t allowed to use cellphones altogether when driving a car.

Aspiring drivers may ask for a Phase I (Instructional) Permit once they have turned 15, have completed at least 30 hours of theoretical instruction and are enrolled in an approved driver education course. When driving on public roads, they must be accompanied by a parent, legal guardian or designated grown-up licensed driver at all times.

A Phase II (Provisional) License may be received once the kid has turned 16, has held a Phase I Permit for at least six months and has completed a driver education course. Provisional License holders may not drive between 12 am and 5 am unless accompanied by a licensed adult of 25 or older.

The Phase III (Full) License may be received once the kid has turned 18, has held a Phase II Permit for at least one year and has kept a clean driving record.

Penalties for driving without insurance in Minnesota

Driving without insurance in Minnesota is a misdemeanor. The penalties include fines, possible jail time and loss of your driving and vehicle registration privileges: