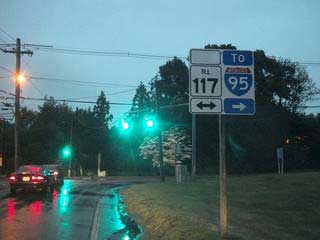 The state of Rhode Island uses a Tort insurance system. Whoever is found at fault in an accident must compensate the other parties for their material losses and, eventually, pay for their medical expenses.

Liability insurance and Uninsured/Underinsured Motorist Coverage is mandatory in Rhode Island. The minimum limits are 25/50/25 for Liability and 25/50 for UM:

Rhode Island residents spend slightly more on car insurance than the rest of the country. The average insurance policy in RI costs $1,810 per year, whereas the mean figure across the country is of only $1,678.

The state of Rhode Island has taken stance against distracted drivers. Every form of text-based communication is banned in RI and, should you be caught texting and driving, you can be fined between $100 and $350. Moreover, school bus drivers and teenage drivers under 18 aren’t allowed to use a cellphone altogether when operating a vehicle.

Rhode Island uses a Graduated Driver Licensing (GDL) system for teenage drivers between sixteen and eighteen. Provisional permit holders must be accompanied by a licensed driver of legal age at all times, may not drive between 1 am and 5 am unless on their way to/from school, work or a religious event and may not carry more than one underage passenger except for immediate family members.

Penalties for driving without insurance in Rhode Island

Rhode Island laws require continuous coverage for all registered cars. Letting an insurance policy lapse will have the DMV suspend your driving privileges and you will get a $500 fine (amount as of February 2012). In addition, the court will ask you to file a SR22 certificate for three years.