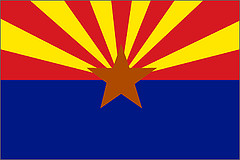 Arizona uses a Tort insurance system. If you have been found at-fault in an accident, you and your insurance company must cover the damages.

Experts recommend that you buy a larger package. $10,000 in property damage, for instance, is much too little to cover the repairs of an expensive car that didn’t even get totalled.

Conducting text-based communication while driving a vehicle in Arizona is prohibited. It is also forbidden for school bus drivers to use mobile phones altogether. No other bans are in place, but authorities strongly recommend using a hands-free device or, better yet, pulling over when answering or making a phone call.

Arizona uses the Graduated Driver Licensing (GDL) system to allow teenagers to operate a car while still minimizing their risk of running into dangerous situations. You have to be 15 and a half years to be eligible for a restricted license. Restrictions are in line with the GDL recommendations:

If this is your first or second violation, you are subject to a fine of up to $1,000. Arizona has recently adopted the “three strikes law” – should you be caught without insurance for three times within three years, you will be subject to much harsher conditions in order to get your driving privileges reinstated. SR22 filing can and will most likely be one of the requirements.