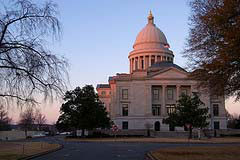 The state of Arkansas uses a Tort insurance system. If you cause an accident, you and your insurance company are responsible for paying for the medical expenses of all passengers injured, as well as property damages you have caused.

Drivers on Arkansas roads must hold at least a Liability policy of 25/50/25:

The average Liability premium in Arkansas is of $1,515, a little less than the national mean of $1,678. You can find cheaper insurance in Arkansas too, and sometimes even in large cities. The average for Hot Springs, for instance, is of $1,285, $1,432 for Little Rock and $1,119 for Forth Smith.

About using cellphones when driving

Arkansas uses the GDL (Graduated Driver Licensing) system for all drivers between 14 and 18. The concept is meant to minimize the occurrence of high-risk situations for inexperienced drivers and, consequently, protect all traffic participants.

What happens if you drive without insurance in Arkansas